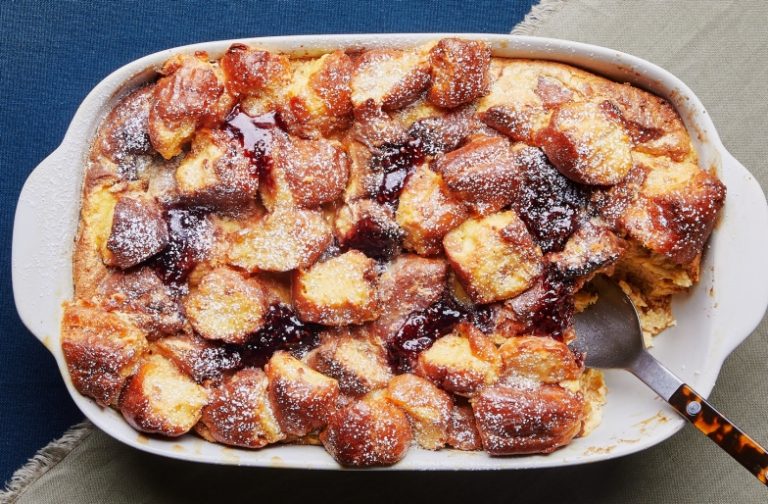 I love listening to cooking podcasts for inspiration while I run. One podcaster talked about how she would pick up donuts at the gas station, leave them out to get dry, and then make bread pudding out of them for Christmas morning. She prepared the bread pudding on Christmas Eve, so all she had to do was throw the pan in the oven while the kids were unwrapping their gifts.

I thought, “Hmm, I can do that!” For an even more indulgent breakfast, make a double batch of the chocolate glaze when making the donuts and drizzle each piece of bread pudding with 1 to 2 tablespoons of the extra glaze. 2. Grease a large nonstick skillet with coconut oil or coconut oil spray and place over medium-high heat.

When hot, pour ¼ cup of the batter into the skillet, forming a 3-inch round pancake; repeat to cook 2 pancakes at a time. Cook until cooked through on the bottom, about 2 minutes, then flip and cook for another 2 minutes. Remove the pancakes from the pan and repeat with the remaining batter. 3. To make the syrup, place the softened cream cheese, cashew milk, sweetener, and vanilla in a small bowl and beat with a hand mixer until smooth.

Add more or less milk depending on how thick or thin you prefer the syrup. Serve the pancakes drizzled with the syrup. 4. Store extra pancakes and syrup in separate airtight containers in the refrigerator for up to 3 days. Reheat the pancakes on a baking sheet in a preheated 350°F oven for 5 minutes or until warmed through.

Heat the syrup in a saucepan over medium heat for about 2 minutes. 3. In a large bowl, whisk the egg yolks, sweetener, and cinnamon. Gradually whisk the egg mixture into the cream mixture. 4. Use a fine-mesh strainer to strain the mixture into another bowl. Let cool for 10 minutes, skimming any foam from the surface. 5. Divide the mixture among six 6-ounce custard cups. Place the cups in a large baking dish that is at least 2 inches deep.

Add hot water to the baking dish to come halfway up the sides of the cups. Cover the baking dish with a lid or foil to trap the steam. 6. Bake until the custards are set but the center of each still moves slightly when gently shaken, about 55 minutes. Remove from the water. Chill the custards until cold, about 3 hours. 7. Store extras in an airtight container in the refrigerator for up to 3 days.

Get treatment with the 12-step program at a faith-based rehab center.

Why Getting Alcohol Detox is Important?

How to incorporate spirituality as a part of your rehab treatment?