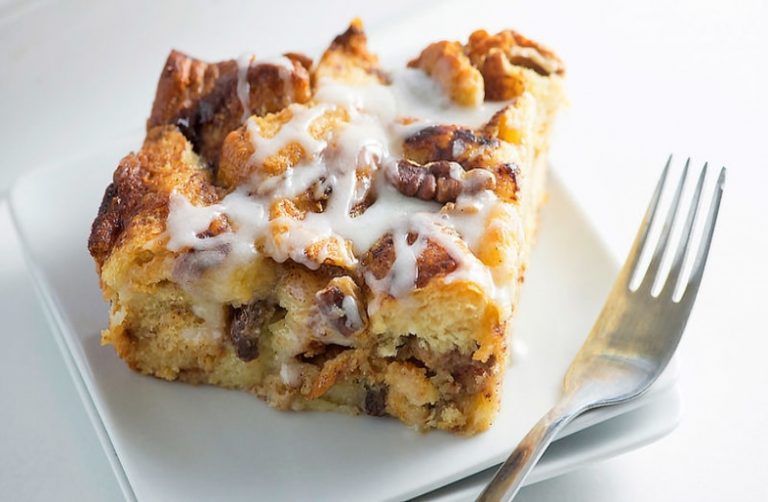 This bread pudding is not only super-tasty, but also extremely low in carbs because there are no nut flours in it. And this recipe is friendly to those who need to remain dairy-free. To make the bread, preheat the oven to 350°F. Grease an 11 by 7-inch baking dish. 2. Sift the protein powder and sweetener and set aside. In a large clean bowl, whip the egg whites until foamy (save the yolks for making ice cream).

Add the cream of tartar and continue to beat until the whites are very stiff (when sufficiently stiff, you will be able to turn the bowl upside down and the whites won’t fall out). Add the vanilla, then quickly fold in the protein powder mixture and cinnamon. Pour the batter into the prepared baking dish. Bake for 40 minutes, until golden brown.

Let cool completely, preferably in the refrigerator overnight. When completely cool, cut the bread into 1-inch cubes and place them in a large mixing bowl. To make the bread pudding, preheat the oven to 350°F.

Grease an 11 by 7-inch baking dish. Cover the bread cubes with the cashew milk and cream; set aside. In another bowl, combine the eggs, sweetener, vanilla, cinnamon, and salt; blend well. Pour the egg mixture over the soaked bread and stir to combine. Pour the mixture into the prepared baking dish. Bake for 30 to 40 minutes, until set.

Let cool in the pan. To make the glaze, place all the ingredients in a blender or food processor and process until smooth. Once the bread pudding is cool, cut it into 12 pieces and pour about 2 tablespoons of the glaze over each piece. Note: The glaze will separate if it sits out and gets too warm. If that happens, puree the glaze again until smooth.

Many Ways To Get Holistic Addiction Treatment Help