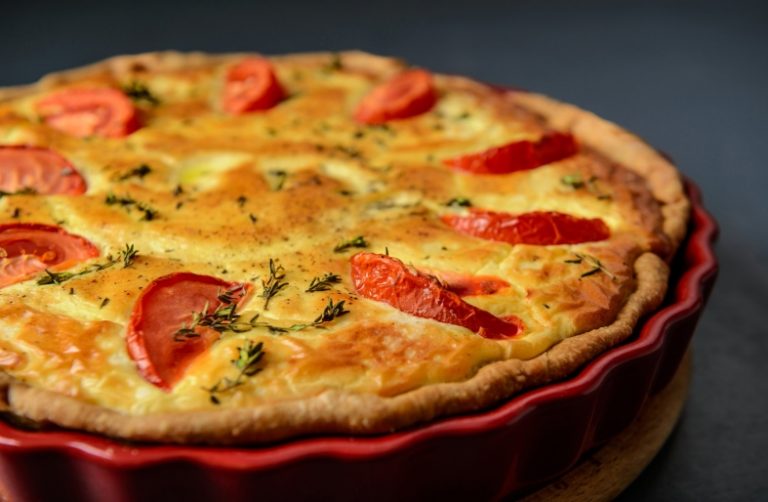 Place the diced bacon in a medium-sized cast-iron skillet or other oven-safe skillet. Set the pan over medium heat and cook until the bacon is crisp, about 5 minutes. Leave the bacon drippings and half of the bacon in the pan; remove the other half of the bacon and set aside. 3. In a blender, combine the eggs, cashew milk, protein powder,

Baking powder, and salt. Blend for about 1 minute, until foamy. Add the chives and ¼ cup of the cheese. Pour the mixture into the hot skillet over the bacon. 4. Transfer the skillet to the oven and bake for 10 minutes. Remove from the oven and top with more cheese. 5. Bake for another 10 minutes or until the Dutch baby crust is puffed and golden brown. Cut into wedges, garnish with the reserved bacon, and enjoy! 6. Store extras in an airtight container in the refrigerator for up to 3 days. Reheat on a rimmed baking sheet in a preheated 350°F oven for 5 minutes or until warmed through.

To make the biscuits, preheat the oven to 400°F. Grease a baking sheet or 8 wells of a standard-size 12- well muffin pan with coconut oil spray. 2. In a medium-sized bowl, whip the egg whites until very stiff, then gently mix in the garlic. Set aside. 3. In a separate medium-sized bowl, stir together the almond flour, baking powder, and salt until well combined. Cut in the cold diced butter until the butter pieces are pea-sized or smaller.

Gently fold the dry mixture into the egg whites. Fold in the cheese. If the dough is too wet to form into mounds, add a few tablespoons of almond flour until the dough holds together well. 4. Using a large spoon, dollop the dough onto the greased baking sheet (or into the greased muffin cups), making 8 biscuits total. Bake for 11 to 15 minutes, until golden brown.

Reduce the heat to medium-low and simmer for 2 minutes to thicken the gravy further, stirring constantly. Season to taste with salt and pepper. 6. To serve, split the biscuits in half. Place 2 halves on a plate, then top with about ⅓ cup of the sausage gravy. Repeat with the rest of the biscuits and gravy.