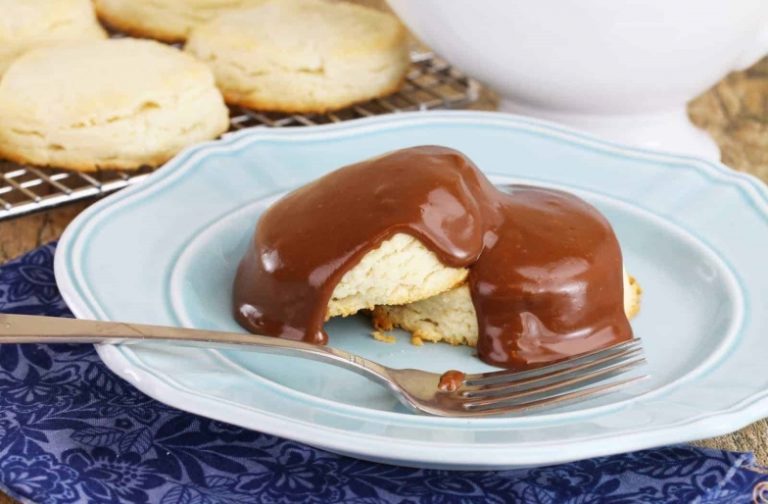 Preheat the oven to 400°F. Grease a baking sheet or 8 wells of a standard-size muffin pan with coconut oil spray. 2. To make the biscuits, whip the egg whites in a medium-sized bowl until very stiff. In a separate medium-sized bowl, stir together the almond flour, sweetener, baking powder, and salt until well combined.

Then cut the chilled butter into the flour mixture. (If the butter isn’t chilled, the biscuits won’t turn out.) Gently fold the dry mixture into the whites. If the dough is too wet to form into mounds, add a few tablespoons of almond flour until the dough holds together well. 3. Using a large spoon, dollop the dough into 8 mounds on the greased baking sheet (or into the greased muffin cups) and bake for 11 to 15 minutes, until golden brown.

Cook, stirring often, until the butter foams up and brown (but not black!) flecks appear. Remove from the heat and allow to cool a bit. Using a hand mixer, cream the browned butter, cream cheese, and sweetener in a medium-sized bowl.

Add the cocoa powder, espresso, and vanilla and beat until combined. 5. Serve the biscuits with the warm gravy poured over them. 6. Store extra biscuits and gravy in separate airtight containers in the refrigerator for up to 3 days.

The biscuits can be frozen for up to 1 month. Reheat the biscuits on a baking sheet in a preheated 350°F oven for 3 minutes or until warmed through. Reheat the gravy in a saucepan over low heat, whisking often, for 1 minute or until the gravy loosens a bit. Do not overheat or the chocolate will separate